Ohio Gov. John Kasich has a remarkably selective memory, especially when it comes to when Ohio’s recovery from the worst recession in the nation’s history really started, which a monthly financial report issued by his own budget director shows started in early 2009, nearly two years before he was sworn-in as Ohio’s 69th Governor in early January of 2011.

Ohio’s budget director, Tim Keen, releases a document each month called the Monthly Financial Report [MFR]. The last MFR made public on June 11 was 28-pages long and chock full of national and state statistics on a variety of economic topics. Keen has produced a similar report for each of the 42 moths Gov. Kasich has been on the job. The Kasich Administration has taken credit for 238,000 jobs created over this time, and even rounded that figure up to a cool quarter million jobs, a figure prominently referenced in political ads aired statewide to burnish the reputation bestowed on him by the Republican Governor’s Association [RGA] that he’s a “comeback” governor who has performed economic magic by balancing a budget without raising taxes. Gov. Kasich self-described his performance as a job creator as an “Ohio miracle,” but others have called it more magic and illusion than miracle.

For each of these 42 months so far, budget director Keen has prominently displayed for all to see, even though few have, especially statehouse reporters, that Ohio’s recovery started under former Democratic Gov. Ted Strickland, who after being elected in 2006 following years of Republican pay-to-play scandals had the bad luck of being captain of a ship of state that was already faltering under more than a decade of total GOP control. After a year in office, Gov. Strickland was confronted with the buzzsaw of the Great Recession that over about 18 months decimated the jobs of hundreds of thousands of workers. Citizen Kasich pounced on Strickland’s misfortune, attacking Strickland with the tag line “he couldn’t get the jobs done,” a grammatically awkward bumper sticker line that was good enough to ensnare Strickland in a web that eventually led to his defeat by 77,127 votes statewide, or about 2 percent in an election where less than half of registered voters bothered to vote.

In the Keen’s June MFR, on charts on page 1 and 3 clearly show that John Kasich inherited a state in recovery. One charted titled “Real GDP, Percent Change, Annual Rate,” shows GDP recovered from its nadir in early 2009, nearly two years before Kasich took over as governor. Another chart titled Ohio Economic Coincidence Index shows the same turnaround starting under Strickland.

Gov. Kasich has avoided an explanation of exactly what he would have done differently than what then-governor Strickland did to keep Ohio from dissembling into a real economic basket case. For the Kasich Administration, the alluring but false narrative of a broken state was again reiterated when at the GOP’s recent annual dinner and fundraiser a couple weeks ago a fancy fold-out brochure labeled “Ohio was broke, produced by the Kasich-Taylor team, was placed at each contributor’s seat to burnish the RGA’S contrived story of Kasich as a comeback governor.

When the Great Recession hit Ohio, and virtually every other state with a vengeance, Gov. Strickland cut staff, reduced budget expenditures and used federal stimulus money and stabilization funds to keep the state from sinking bow first. Strickland did what any governor would have done to guide the state through a storm as fierce as this 2007-2008 recession, he tapped the state’s rainy day fund, created for just such dire circumstances. One of Gov. Kasich’s best lines, especially for those who don’t understand the purpose of a rainy day fund and who think it’s there solely to boost credit ratings, is that Strickland reduced it to 89 cents, a fact without an explanation. John Kasich jokes that Strickland left Ohio with less in its rainy day fund than many children have in their piggy bank. Catchy and cute, but misguided and unthinkable to any elected leader responsible to keep a state, its families and workers and business community afloat.

Kasich, a former managing director for Lehman Brothers, the highly leveraged Wall Street investment banking firm whose bankruptcy as a result of subprime home mortgages triggered the economic meltdown Ohio and other states are still struggling to recovery from, would have Buckeyes believe that he would not have touched a dime in the rainy day fund, and would not have accepted federal funds to help right the ship of state. In fact, Gov. Kasich would have had to do all that Strickland did, because had he reduced income taxes as he implies he would have to create jobs, Ohio would be in economic straights even a sleight-of-hand political performance artist like Kasich, who has never run a business of his own and who has grown rich from 18 years as a Congressman, a high-paid TV political talk show host for the Fox News Channel and from big payout years at Lehman Brothers, would need a magician’s assistant to perform.

Bill Clinton, who was the featured draw and speaker at the Democrats annual dinner and fundraiser held last Friday, said Strickland’s loss to Kasich in 2010, the year John Kasich jumped in front of the Tea Party parade and used the momentum of the movement to propel him to a win despite less than half of registered voters bothering to vote that year, was a reversal of fortune for a governor who got deluged but managed to work his way into recovery mode. Reliable estimates say more than 60,000 jobs were created during Strickland’s remaining years as governor, a feat Gov. Kasich really hasn’t duplicated in the same time period, even though he’s enjoyed the political bounty only a friendly Republican-dominated legislature could give him. Kasich has claimed he balanced a budget out of balance by $8 billion, an estimate produced by Kasich’s Lt. Governor, Mary Taylor, who at the time was Auditor of State. Other sources said the real figure was more like $5 billion, but in any event, every governor has balanced the state budget, one way or another, because the Ohio Constitution mandates the executive and legislative branch produce a balanced budget.

So each month that Director Keen sends out his budget report, the unmistakable and undeniable truth of the state’s economic health is clear and present: It shows Ohio’s real comeback governor was Ted Strickland, not John Kasich. 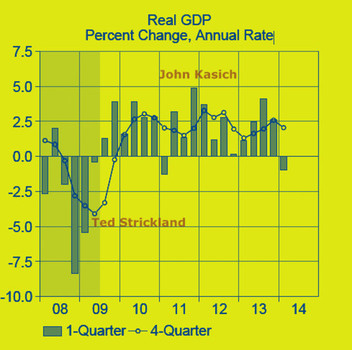