For the second time in two weeks, Governor Kasich dodged the question of where he stands on right-to-work yesterday saying, “It’s fair for you to ask. It’s also fair for me to say I don’t live in the future.” In late January, the Governor stated that right-to-work was “not on my agenda.” It’s clear that the Governor has not changed his anti-union philosophy on right-to-work.

“The Governor’s comments on right-to-work are not only dismissive, they’re insulting. Ohio’s hardworking men and women deserve a Governor who plans for the future and makes their right to negotiate for safe working conditions and fair pay a priority. As Governor, I will veto any anti-union legislation that comes across my desk.” 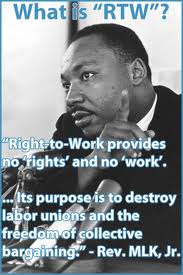