Tonight, Governor Kasich will speak at Sinclair Community College’s graduation ceremony. What he’ll fail to mention is that, thanks in part to $6 million in state funding cuts, Sinclair Community College had to increase its tuition in 2012 – another consequence of education cuts that is causing Ohio’s young adults to become increasingly saddled with student loan debt.

Sinclair Increased Tuition After Losing $6 Million in State Funding: “Sinclair Community College students will pay higher tuition starting this summer, a move that will generate an additional $2.3 million to partially offset losses in state funding and lower levy revenue due to declining property values. The Sinclair Board of Trustees on Tuesday approved an increase of $2.98 per credit hour for Ohio residents and $10 for out-of-state and international students. With the conversion to semesters this fall, tuition will be $92.37 per credit hour for Montgomery County students. Annual tuition for full-time students from the county will increase to $2,771. Tuition will increase to $139.62 per semester credit hour for other Ohio residents and $266.40 per semester credit hour for all others. Sinclair’s revenue has decreased in several areas. State funding was reduced $6 million in fiscal year 2012, and the college expects flat funding or additional decreases in 2013.”[Dayton Daily News, 3/14/2012]

State Higher Education Spending Hits Fifteen Year Low: “In fiscal 2015, which begins July 1, 9.9 percent of the state budget will be allocated to higher education funding — the first time that figure has dropped below 10 percent in at least 40 years. Despite the colossal increase in the cost of a college education, Ohio’s general fund budget will spend less money on higher education in fiscal 2015 than it did in fiscal 2000. Meanwhile, many of Ohio’s young people are priced out of the higher education marketplace, while others are saddled with unconscionable debt that takes decades to repay.” [Cleveland Plain Dealer, 3/28/2014] 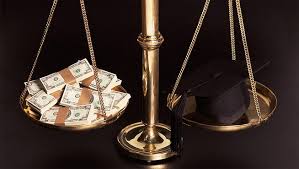