Would you like to volunteer to help flip Georgia BLUE? There are two important senate races that will determine the fate of President-Elect Joe Biden’s and Vice President-Elect Kamala Harris’ agenda for the next four years. Currently, the Senate is sitting at 50 Republicans and 48 Democrats. If Georgians vote Jon Ossoff and Rev. Raphael Warnock as their new senators, Vice President-Elect Harris will be the tie-breaking vote! Here are a few ideas if you would like to help in any way!

If you would like to send a check, please include your name, address, city, state, zip code, name of employer (or self employed) and title/position. Send checks payable to:

Do You Have Family/Friends Living in Georgia?

Important Dates for
the Senate Runoffs in Georgia

Wednesday, November 18, 2020
Election officials can begin mailing absentee ballots.
Any registered Georgia voter can cast their ballot by mail.
Voters can request an absentee ballot through an online portal.
Applications can also be submitted by mail, by fax or in person
at a voter’s county board of registrar’s office.

The presidential race has finally been called for former Vice President Joe Biden, but the fate of the Senate remains up in the air. Whether Democrats or Republicans control the Senate largely hinges on two runoff races in Georgia, which, despite a looming recount, looks like will end up blue for the first time in nearly 30 years.

Both Democratic candidates — Jon Ossoff, an investigative journalist, and Rev. Raphael Warnock, a civil rights activist and the pastor at Atlanta’s Ebenezer Baptist Church — are up against Republican incumbents, Senator David Perdue and Senator Kelly Loeffler, because no candidate secured over 50% of the vote. On Jan. 5, 2020 (or earlier, if they opt to vote early or via mail), Georgians will make their choice of who they want representing them.

Warnock has centered climate change, reproductive rights, LGBTQ+ rights, and voting rights in his campaign for the Senate. He is also a vocal advocate for criminal justice reform and Medicaid expansion. Ossoff likewise has campaigned on guaranteeing a public health care option and a strengthened Affordable Care Act (ACA). He is also an abortion rights and clean energy advocate, and is committed to ending Citizens United, which allows corporations and private organizations to donate to political campaigns without caps.

In contrast, Loeffler and Perdue are considered two of President Trump’s strongest allies. Perdue has made “law and order” a focal point of his campaign, supports school choice, and voted to repeal the ACA. Loeffler is a strong Second Amendment supporter who has voted to dissolve the ACA’s pre-existing conditions protections. Both candidates have also disputed Georgia’s presidential election results, calling for the resignation of the state’s Republican Secretary of State based on claims of election fraud, for which there is no evidence. Both also strongly oppose abortion rights.

“Flipping one or both of Georgia’s Senate seats would have huge implications for national policy for the next four years,” Deborah Scott, the executive director of Georgia STAND-UP, a progressive think tank for working communities, tells Bustle. “This is an opportunity to build a progressive agenda that could expand Medicaid, paid family leave, increased SNAP benefits, increased access to quality affordable health care, affordable housing, criminal justice reform, and access to quality jobs.” Scott adds that STAND-UP welcomes support from volunteers and organizations interested in seeing progressive change.

There’s a lot riding on which senators Georgia sends to D.C., and understandably, Democrats who don’t live in the Peach State are also keen to help out. Here are a few ways to volunteer to help the Georgia Senate runoff races, no matter where you live.

If you live in Georgia, you can get involved with the Warnock and Ossoff campaigns on the ground. From knocking on doors to hosting an event in your home, attending rallies, or housing campaign staffers, there are ample ways for locals to show their support without spending a dime.

The Warnock campaign utilizes an app called Outvote, which helps Georgians who support Warnock to get their own friends and families to the polls. They’re also collecting supporter stories through their website under the hashtag #WhyImVotingWarnock.

The Warnock campaign is actively recruiting members for their Rapid Response Team, or people who can help amplify their content on social media. The Ossoff campaign is also running daily phone banks, which you can participate in virtually, no matter where you live.

The Georgia Postcard Project is a grassroots initiative where you can write postcards to registered Democrats in Georgia about the importance of the runoff races, as well as share information about early or mail-in voting.

In addition to making donations directly to the Ossoff and Warnock campaigns, Georgia Democrats, Georgia STAND-UP, or Fair Fight, there are a number of other on-the-ground organizations working to get out the vote (as they did during the general election). If you’re able to donate, some key groups who could use financial support are:

Yes, You Can Also Buy Warnock And/Or Ossoff Merch

No matter where you live, you can support the Warnock and Ossoff campaigns by buying official campaign merch. (Just remember not to sport your Warnock mask at the polls, since that can be perceived as electioneering.)

If you want your dollars to do double-duty, Sarah Price, an Atlanta-based marketer, started the Warnock Your Ossoff campaign as soon as it was clear the races were going to a runoff. 100% of the proceeds from all sales — T-shirts, sweatshirts, yard signs, and more — are split 50-50 to each campaign, and the site also refers people directly to Fair Fight to support the campaigns further. 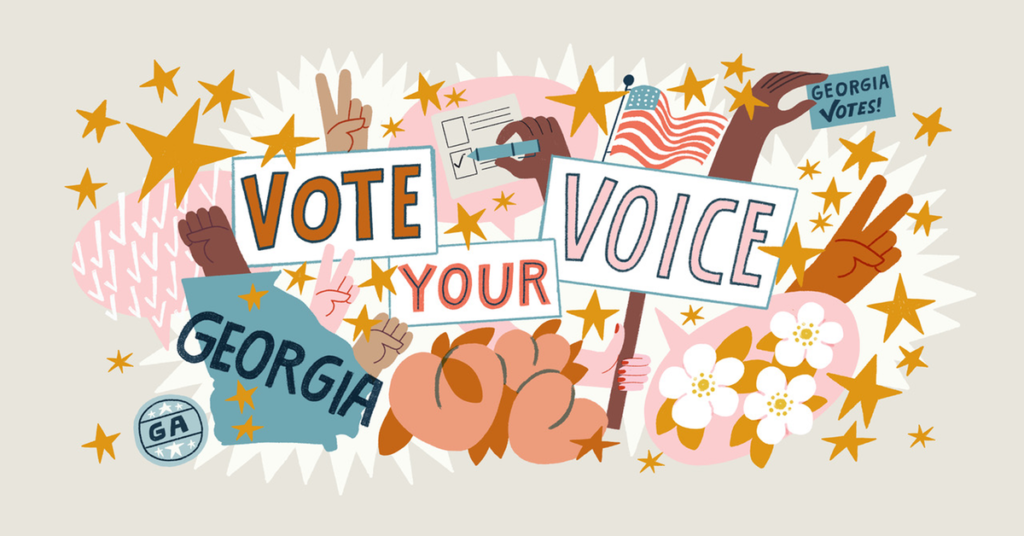