As a Democrat, I’m a firm believer that we need to be a party that stands up for our values, and for the rights of the citizens of our state.

And when we stand up, I want to do so in a way that shows we are both serious and deeply passionate about the issues we care about.

Along those lines, I am proud to let you know that today, the Ohio Democratic Party today filed an Amicus Brief at the United States Supreme Court urging the court to reverse the unfortunate Sixth Circuit ruling upholding Ohio’s ban on marriage equality. Moreover, I am thrilled that in putting this brief together—working hand in hand with the Michigan Democratic Party—we have united hundreds of officials from all four states of the Sixth Circuit (Kentucky, Tennessee, Michigan and Ohio) to speak up in one voice for the rights of those who these “bans” have unconstitutionally targeted for a decade.

We are especially called upon to play this role because Ohio Attorney General Mike DeWine, among others, has been all too eager to defend these bans at every level. Our aim is to not simply criticize him from afar for doing so, but to go to the highest court in the land and forcefully rebut his deeply flawed legal reasoning.

You can read the Amicus Brief by clicking here.

As a lawyer who has been involved in many appellate briefs (and as a former law clerk who reviewed many), I can say that it is one of the most well-argued legal documents I’ve encountered—thanks to a team of nationally respected attorneys who worked on the project.

Finally, this will not be an isolated action. It has become crystal clear that as in this case, Attorney General DeWine seems far too eager to go to court on behalf of his political party or ideology while too often ignoring the rights and interests of the Ohioans who pay his salary. So we have created a new Advocacy Committee at the Ohio Democratic Party, guided by respected lawyers from around Ohio, and we will file more such briefs whenever courts need to be reminded that Attorney General DeWine is failing to represent Ohio, and failing to understand the law.

We will keep you posted on future cases.

Michigan and Ohio Democratic Parties, Along With Officials
From All Four Sixth Circuit States,
United to Submit Amicus Brief in Support of Marriage Equality

3.05.15 – Today, the Ohio Democratic Party and the Michigan Democratic Party, joined by more than 150 elected officials from across the four states of the Sixth Circuit, together filed an amicus brief with the United States Supreme Court in support of marriage equality.

The Brief urges the Court to reverse the judgment of the Sixth Circuit Court of Appeals, and reject the argument made by the Sixth Circuit and the Ohio and Michigan Attorneys General that the basic constitutional rights of Ohio couples and their children should be subject to popular vote. To view the Brief click here.

“Elected officials from across the Sixth Circuit are speaking up for the thousands of couples in our four states whose rights are being violated by the bans on same sex marriage,” said David Pepper, Ohio Democratic Party Chairman. “And our point is simple—basic rights such as equal protection should not be subject to popular elections, but are protected by the United States Constitution.”

“Here in Michigan, far too many families have been denied liberty and justice for too long, because of the out of touch actions of Republicans Bill Schuette and Rick Snyder,” said Lon Johnson, Michigan Democratic Party Chair.

“Thousands of taxpayer dollars have been wasted on frivolous, fringe arguments, which have only served to embarrass our state. This effort to deny equal rights to parents and children, based on nothing more than a desire to score cheap partisan points with the far right wing of the Republican party, is just wrong,”Johnson said.

Mark Totten, one of the attorneys who wrote the brief, added: “For two years now the State of Michigan has argued that the children at issue in the Michigan case would be better off as orphans then have two gay parents.  That’s wrong.  The rights of these kids – so many of whom are special needs – to have two loving parents should not be decided at the ballot box.”

State Representative Nickie Antonio added, one of hundreds of officials to sign the brief, “All loving, committed relationships in Ohio should matter equally. However, while I have the responsibility to pass laws that affect over 11 million Ohioans as a State Representative, I am denied the dignity and protections to marry Jean Kosmac, my partner of 20 years. It’s time to value all families in Ohio.” 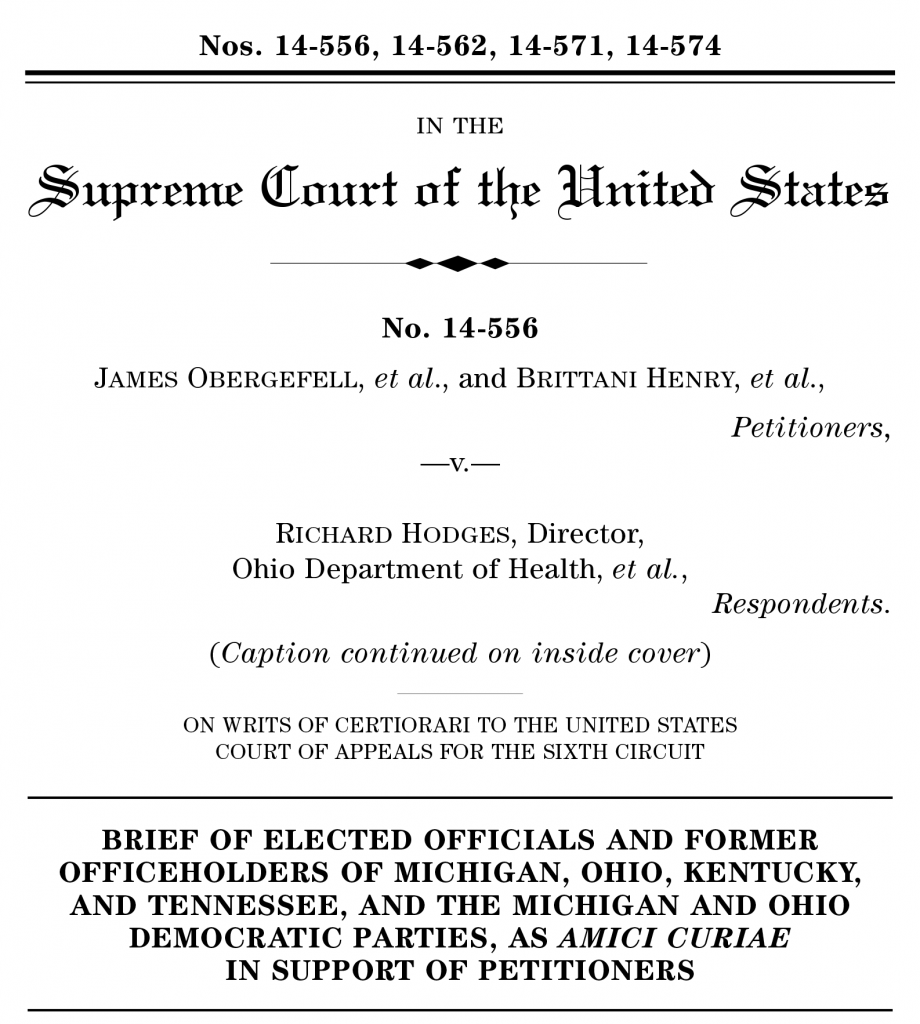