Judge Jennifer Brunner serves as one of 8 state appeals court judges of the Tenth District Court of Appeals located in Franklin County, Ohio; she previously served in elective office as a Common Pleas Judge (2000-2005) and Ohio 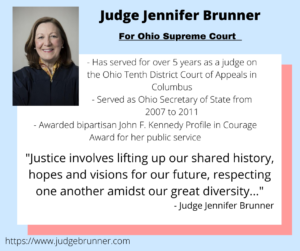 Secretary of State (2007-2011). In 2008 she received the bipartisan John F. Kennedy Profile in Courage Award for her public service. In 2010, Judge Brunner was a candidate for the United States Senate. Previously, she was a principal at Brunner Quinn just prior to being elected to her current judicial position in 2014 and reelected in 2016. Having founded her law firm in 1988, Judge Brunner holds 17 years private law practice experience as well as state government experience in the Ohio Senate and the Secretary of State’s office as a staff attorney.

Judge Brunner has assisted foreign governments with rule of law and self-governance matters, including anti-corruption and judicial reform consulting in the Republic of Serbia, election observation in the Arab Republic of Egypt and providing legal training in the Socialist Republic of Sri Lanka.

Judge Brunner has been married since 1978 to attorney Rick Brunner, who grew up in Columbiana County. They 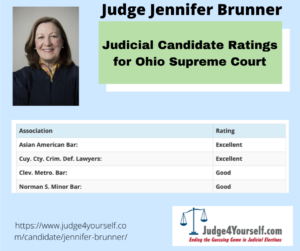 Judge Brunner has traveled extensively to destinations in Asia, Africa, Central America, Europe and North America. She is the author of a memoir entitled, Cupcakes and Courage, about growing up in Ohio, her experiences in public life and her 2010 U.S. Senate campaign. She loves dogs and cats, art, reading and music and paints in encaustic medium. 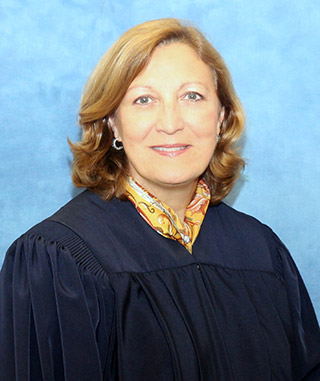