FitzGerald: “The new restrictions that Governor Kasich has signed into law amount to legalized discrimination, plain and simple.”

Ohio’s cuts to early voting discriminate against blacks and Hispanics in violation of the Voting Rights Act, a new lawsuit alleges.

The suit, to be filed Thursday morning in federal court by the American Civil Liberties Union, suggests there’s a chance that the controversial cuts, enacted in the nation’s most pivotal swing state, could be blocked before the November election. And it will offer the latest test of the recently weakened Voting Rights Act’s ability to stop the wave of Republican-backed voting restrictions enacted in recent years.

Because minorities are more likely than whites to take advantage of early voting opportunities, in Ohio and elsewhere, the ACLU lawsuit claims, the cuts violate Section 2 of the Voting Rights Act, which bars election laws that have a discriminatory effect.

In the space of just over a week in February, the Ohio GOP made it significantly harder to vote early in the Buckeye State.

First, they passed a law that cut six days from the early voting period—including, crucially, the so-called “Golden Week”, when people can register and vote at the same time. Experts say same-day registration is among the most effective ways to bring new voters into the process. Then Secretary of State Jon Husted, a Republican,followed up by announcing uniform new hours for early voting, which eliminated early voting on Sundays and on weekday evenings, making it impossible for black churches to conduct popular “Souls to the Polls” drives after church on the Sunday before the election.

In 2008, black voters comprised 56% of all weekend voters in Cuyahoga County, Ohio’s largest, even though they made up just 28% of the county’s population.The lawsuit will offer a test of how effective Section 2 is at stopping he recent wave of voting restrictions—a key question in the wake of the Supreme Court’s neutering of Section 5 last year.

There’s little precedent for Section 2 being used to successfully overturn the recent wave of voting restrictions. But on Tuesday, a federal judge in Wisconsin struck down that state’s voter ID law under Section 2, ruling that it discriminated against racial minorities who are more likely to lack ID. The ACLU led the legal effort in that case, too. The ruling is being appealed.

And more broadly, the courts have proved an effective line of defense against GOP voting restrictions. Recently, state courts have struck down voter ID laws in Pennsylvania and Arkansas (though the Arkansas ruling was partially stayed this week).

In 2012, Husted cut the last three days of early voting, including a Saturday and Sunday. That move was reversed after the Obama campaign filed a lawsuit. But that claim was brought not under the Voting Rights Act but under the Constitution’s Equal Protection Clause, because the cuts didn’t apply to members of the military.

“The new restrictions that Governor Kasich has signed into law amount to legalized discrimination, plain and simple,” Cuyahoga County Executive Ed FitzGerald, who is running for governor, told msnbc in a statement. “I look forward to working with the ACLU to protect the right to vote here in Ohio.”

And State Sen. Nina Turner, a staunch voting rights advocate who is challenging Husted for secretary of state, said: “While it is unfortunate that advocates of ballot access must again turn to litigation, I commend the ACLU for continuing to stand up for the rights of all Ohioans. There is no right more fundamental than voting, and we ought to be doing everything possible to make casting a ballot simple, convenient, and secure.” 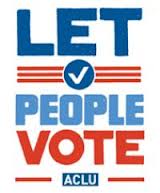