To contribute to the campaign:

This November the election for Justice of the Ohio Supreme Court will be a close race. Whoever wins will preside over some of the biggest cases Ohio has seen in decades. The importance of this election cannot be ignored. Ohio 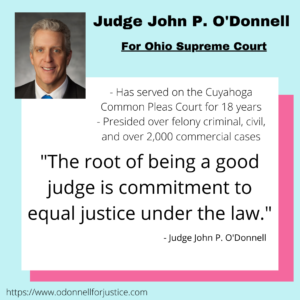 needs the right candidate, and that candidate is Judge John P. O’Donnell.

Judge John P. O’Donnell is running for Associate Justice of the Ohio Supreme Court. John currently serves on the Cuyahoga County Court of Common Pleas. He was first elected in 2002, and then again in 2006 and 2012. The Cuyahoga County court is one of Ohio’s busiest, and during that time Judge O’Donnell presided over scores of jury trials in felony criminal cases and civil lawsuits. In 2008, Judge O’Donnell was selected by the chief justice of the Ohio Supreme Court to be one of only eight trial court judges in the state to preside over a commercial docket devoted strictly to business litigation. He has been responsible for over 2,000 commercial cases while still handling all other varieties of civil lawsuits and a felony criminal docket. He is the author of over one hundred judicial opinions. 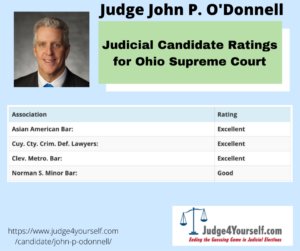 commercial litigation.  Judge O’Donnell has written at least 200 judicial opinions, a rarity for a trial court judge, and has been a frequent presenter at continuing legal education programs.  He has consistently been rated as “Excellent” in rankings decided by local bar associations whose members are the people most familiar with his work, and whose clients are affected by his decisions.

has served on the boards of several Northeast Ohio non-profit organizations, including the St. Malachi Center, the Cleveland Law Library Association, the Cuyahoga County Law Library Resource Board and Lakewood City Academy.

During his most recent non-campaign year Judge O’Donnell logged more than 10,000 miles by bicycle on Ohio’s roads, byways and trails, many of them commuting to work at the courthouse.  Judge O’Donnell was raised in Euclid.  He went to St. Joseph High School in Cleveland and Miami University in Oxford.  He and his wife are raising five children in Lakewood.