To make mail a check, please make it payable to: 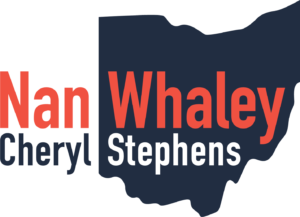 While Republicans in Washington and Columbus block action on issues like gun violence, climate change, white supremacy, and economic inequality, Mayor Whaley is leading the fight for progress locally by bringing people together around Democratic values.

When Nan took office, it felt like Dayton was in free fall. But as mayor, she has led an economic resurgence as jobs and people move to the city for the first time in decades. Under her leadership, Dayton cut its opioid deaths in half in just one year. She successfully fought to give every four-year-old access to quality preschool and for paid family leave for city employees. When tornadoes ripped through town, she brought the community together to rebuild. When the KKK came to Dayton she led the real, tough conversations about racial equity and inclusiveness.

When a mass shooting left nine dead in Dayton in August 2019, Nan used her platform to reignite a national conversation on gun reform. She confronted President Trump for his inaction and testified on Capitol Hill. Her leadership was profiled in the New York Times, Washington Post, and New Yorker.

Nan understands what it will take for Democrats to win again in the Midwest: a laser-like focus on economic issues without compromising on civil rights and other core progressive values. She represents a new generation of local leadership ready to turn Ohio blue once again.

Nan is proud to have chosen Dayton as her home. Originally from Indiana, Nan attended the University of Dayton and has lived in Dayton ever since. She lives in the Five Oaks neighborhood with her husband, Sam, and rescue dog, Louis. She was elected Mayor in November of 2013, following two City Commission terms, and was re-elected in 2017.

While growing up, Cheryl’s family lived across the country and around the world as they followed her father’s career in the Air Force. She considers herself lucky to have found a home in Ohio when her father retired to Wright Patterson Air Force Base outside of Dayton. Cheryl learned the importance of education from her mother, a nurse, and of the perseverance to pursue the

American Dream from her father.

Cheryl and Nan firmly believe that the American Dream should be within reach for all Ohioans. That’s why Cheryl has made building affordable housing and creating safe and healthy neighborhoods the focus of her career.

She is currently the Chief Executive Officer of the East Akron Neighborhood Development Corporation (EANDC), which strives to strengthen communities by providing affordable housing and neighborhood revitalization. Cheryl is also the Councilmember for Cuyahoga County District 10, where she focuses on improving county services and increasing investment in local small businesses. Cheryl has previously served the residents of Cleveland Heights as a Councilmember and Mayor.