The policies of the corrupt, one-party rule have failed Ohio’s middle class. Mike DeWine and the Republicans who have run our state for 32 years, their careers are synonymous with Ohio’s decline. My career is synonymous with Cincinnati’s comeback.

To make a contribution by check, please make payable and mail to:

John Cranley has devoted his life to helping others and implementing real-world change. His father, a Vietnam veteran, and his mother, a school teacher, taught him the values of faith, service, integrity, and making the world a better place. Raised in the Price Hill neighborhood of Cincinnati, John attended St. Williams Elementary School and St. Xavier High School. He then went on to earn his undergraduate degree from John Carroll University and graduate from Harvard Law School and Harvard Divinity School.

​Motivated by a deep sense of social justice, John co-founded the Ohio Innocence Project in 2002, which by using DNA technology has exonerated and freed 33 wrongfully convicted people.

State Senator Teresa Fedor is a Democratic member of the Ohio Senate, representing Lucas County in Ohio’s 11th Senate district. She returned to the Senate in 2019, where she previously served from 2002-2010, following eight years as the Ohio Representative for the 45th and 47th House Districts. Throughout her legislative career, Senator Fedor has championed responsive and responsible government by being the example of how government should work. Regardless of political party, if someone needs assistance, Senator Fedor will be there to help. She brings with her both expertise and an accomplished body of legislative work focused predominantly on education, health care, and human trafficking. She is widely known as a fighter for the people that goes 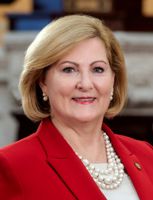 above and beyond for any constituent that contacts her.

As a proud veteran of the U.S. Air Force and Ohio Air National Guard—and former teacher—a resounding theme throughout Senator Fedor’s years of public service is ensuring that Ohio’s government is transparent, accountable, and guards against waste, fraud, and abusive practices. Her belief is that the government should work for the people. She helped to unveil the Bureau of Workers’ Compensation coin scandal, has held shady charter schools accountable to Ohio’s taxpayers and children, made certain that Ohio’s voting machines left a paper trail, and has been the watchdog of Ohio’s unemployment system by fighting for those negatively impacted by the COVID-19 pandemic.

She also advocates successfully for survivors of human trafficking by championing laws to increase the punishment for human traffickers, creating protections for minor survivors, and championing criminal justice reforms for survivors to restart their lives. She has had such success by collaborating across the aisle to work with the Majority, and the Governor, to address this heinous crime against humanity. Senator Fedor’s anti-corruption focus is demonstrated by decades of success. Her attention and action have resulted in the resignations of numerous corrupt leaders, the closing of charter schools built on scams, and hundreds of thousands of dollars in stolen money being returned to struggling unemployed Ohioans.

Senator Fedor is considered the state’s preeminent legislative voice in the fight to combat human trafficking in all forms. With bipartisan support, she has unprecedented success in passing bills to fight this issue: In 2009, she passed legislation creating an Ohio Attorney General’s commission to study the issue in Ohio and a penalty enhancement for human traffickers. In 2010, she passed legislation making human trafficking a stand-alone felony. In 2012, then-Representative Fedor passed The Safe Harbor Act, a comprehensive, victim-centered human trafficking bill. This legislation was followed by the End Demand Act, which tackles market-driven demand for human trafficking by increasing penalties for purchasing sex from minors. Her most recently passed anti-trafficking legislation is the Protect Trafficked Minors Act, which passed in 2020 and altered Ohio criminal law to mirror the federal penalties for trafficking sixteen- and seventeen-year-olds and prevents courts from re-victimizing survivors. Her next legislative priority is to pass the Expanding Human Trafficking Justice Act, which would remove the predicate offenses currently required for a human trafficking survivor to expunge offenses committed due to their victimization.

For 13 years, Senator Fedor has also hosted an annual Human Trafficking Summit: a conference-style event that brings together advocates from around the state to focus on ending human trafficking in all forms. Over the years, the event has grown to reach international audiences and focus on intersecting issues, including the opioid epidemic and the prevalence of labor trafficking – a modern-day form of slavery in which individuals are coerced into performing labor or other services. In 2017, Senator Fedor also hosted the first annual Youth Human Trafficking Prevention Summit. With content geared toward high school students, the interactive event covers topics including social media, safety, self-esteem and health and highlights the role of students and young people in the fight to end all forms of human trafficking.

The driving force in Senator Fedor’s legislative career is fighting for Ohio’s youngest residents and vulnerable communities. Prior to her election to public office in 2000 (Ohio House of Representatives, 52nd District), Senator Fedor spent 17 years as a classroom teacher, which provided her with experiences that she brings to her work as a legislator. Her primary focus includes advocating for appropriate accountability measures and adequate funding for public school districts. She also fights to reduce the increasing “digital divide” within communities and school districts whose residents and students have little or no access to broadband and high-speed internet.  During her time in the legislature, she has also introduced legislation that will curtail the growing problem of cyberbullying, honor literacy and educational attainment among children by celebrating a “Dia de Los Ninos,” create physical and health education standards in Ohio’s schools, require background checks for volunteer coaches, ensure military children are given the same educational opportunities as other children, and create a license plate while providing funding for bullying prevention education.

Senator Fedor fights for Ohio’s most vulnerable residents in a variety of other angles. She introduced the Safe Workplace Act – legislation establishing mandatory sexual harassment training for all state employees. Just this year, she has begun to address the vulnerability of our foster youth by introducing the Foster Youth Bill of Rights and legislation to put driver education back in Ohio schools. Her resolutions have also included calling for the Ohio Environmental Protection Agency to declare Lake Erie impaired based on its unsafe water quality and allowing voters to decide on establishing universal access to Pre-K for all of Ohio’s children.

As a native of the Toledo-area, Senator Fedor grew up in a large Catholic family; she is the second eldest of seven children. She attributes her work ethic and values to the love and sacrifices of her parents, Clayton and Loretta Taylor. They role model treating all people with dignity and respect by living it every day – values that she carries on through her role as a grandmother and her commitment to purposefully considering all of Ohio’s families in everything she does as a legislator. She spends each day amplifying the voices of her constituents and making sure state agencies are really working for the people. Senator Fedor received her Bachelors of Science (B.S.) in Education from the University of Toledo.

Senator Fedor is currently a member of the Senate Judiciary, Veteran and Public Affairs, Energy and Public Utilities Committees. She also serves as the Ranking Minority Member of the Senate Education Committee and the Agriculture and Natural Resources Committee. In addition to sitting on the Ohio Arts Council, Senator Fedor is a member of the American Legion, the National Conference of State Legislatures Criminal Justice Committee, and the National Conference of State Legislatures Education Committee. In the 132nd General Assembly, then-Representative Fedor served on the Armed Services, Veterans Affairs, and Homeland Security Committee; the Ways and Means Committee; and as the Ranking Member on the House Education and Career Readiness Committee.