U.S. Census Bureau announced it will not be able to distribute redistricting data to states until this fall. Initially, the Census was required to have data to states by April 1, 2021. States will not receive the data to begin the redrawing of congressional and state legislative districts until September 30, 2021.

Census2020
The Census2020 provides the data of
apportionment results to all states
for their use to redraw Congressional and state
districts beginning in 2021.

The Fair Districts = Fair Elections Coalition
is committed to reining in partisan gerrymandering.
We seek fair state legislative and
congressional maps that keep communities
together because we that
all elections should be fair and meaningful.

Common Cause Ohio
has been a leading voice for
government accountability for five decades.

Ohio can’t draw new congressional map until 2022 after the U.S. Supreme Court ruled federal courts shouldn’t play a role in fixing partisan gerrymandering. Gerrymandering will now be in the hands of Ohio’s legislators through 2021. If an agreement cannot be reached, then the Ohio Redistricting Commission will play a role. And if all fails, the fate of redistricting will ultimately be in the hands of the Ohio Supreme Court. Right now, the Ohio Supreme Court is made of four Republicans and three Democrats. Links to important articles about gerrymandering are provided.

April 1, 2021 rescheduled to September 30, 2021
Census Bureau will send redistricting counts
to each state. These counts will be used  o redraw
state legislative districts based on population changes.
In Ohio, state legislature is required to propose a
new district map, conduct public hearings and vote.
If the is bipartisan – supported by at least half of the
members in each party – new districts go into effect
for a 10-year period beginning in 2022.

Delayed – New date will be posted
Deadline for the Ohio Redistricting Commission to draw
maps if legislators fail to approve one.
If the commission’s map receives bipartisan support,
new districts are approved for 10 years.
If efforts to achieve a bipartisan compromise fails,
new districts can be drawn by the majority party, but new
districts are authorized for only four years – not 10 years.
The Redistricting Commission has not released a projected
timeline for the 2020 cycle as of 2.01.2021.
Sources: U.S. Census Bureau; Ballotpedia

There will be several virtual events hosted
so we all understand what is involved in the
redrawing of Ohio’s Congressional & Legislative Districts.

Fair Districts Speakers Bureau Training
Tuesday, February 9, 2021 | 7:00 PM
Learn more about redistricting and get prepped to join the
Fair Districts Speakers Bureau so you can lead presentations
and spread the word about the need for fair districts.
This training follows on the “Redistricting 101” session.
If you would like to review that session prior to
attending the 2/9 event, you can access a
recording here and slides here.
If you are interested in the topic, but unable to attend, please register.
Anyone who registers will receive a follow up email
with a recording and additional information.
Please register using this link here.

Here is an opportunity to talk about
community mapping and also a tutorial on District R,
public software developed by MGGG Redistricting Lab,
a research group at Tufts University.
Common Cause Ohio will lead a discussion about
the benefits of community mapping and
then provide a demonstration of the software.

One of the last ‘acts’ that Mike DeWine did as Ohio Attorney General was to file a motion to dismiss the lawsuit that is in front of a three-judge panel in federal court in Cincinnati. DeWine continued his penchant for wasting Ohioans tax dollars. Fortunately, late today the same three-judge panel dismissed DeWine’s request. Thus, the lawsuit will continue as scheduled on March 4.

9.28.18 – CINCINNATI – A proposed Ohio congressional district map to strip the state of its politically gerrymandered voting districts in time for the 2020 election was offered up to a federal court Friday as part of a pending suit challenging the current map. 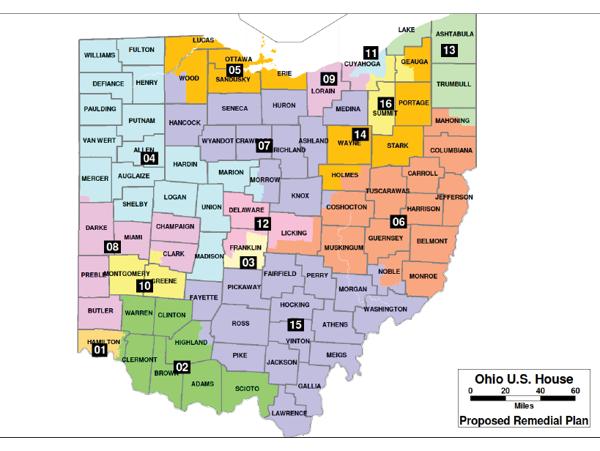 The plaintiffs, including the Ohio League of Women Voters, have argued that Ohio’s congressional map violates the constitutional rights of voters by “entrenching partisan advantage” — the result being 12 predictably Republican districts and four predictably Democratic districts in a state closer to 55-45 politically.

The current map, drawn with Republicans in nearly full control of the process in 2011, makes little geographic sense, and leaves many people without a representative who lives in their area. Some districts meander for 100 miles or more across the state.

Cuyahoga County, for example, has parts of three congressional districts, but none wholly contained within the county. One district, in fact, stretches south to near Canton. One Lorain County district stretches south to Columbus suburbs before extending west almost to Indiana. 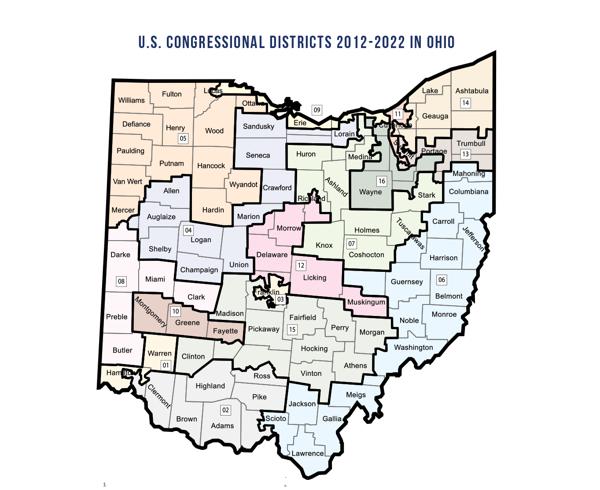 The map proposed in the court filing, shown at the top of this story, appears to make more geographic sense throughout the state.

For instance, the state’s three largest counties — Cuyahoga, Franklin and Hamilton — would all have one wholly contained district. The remaining areas would be shared with other counties.

A three-judge panel in Cincinnati has scheduled a trial for March 4 for the suit, originally filed in May. The judges have allowed numerous Republican lawmakers and voters to intervene in the lawsuit. Named as defendants were elected leaders, including Secretary of State Jon Husted and Gov. John Kasich, two Republicans were outspoken against gerrymandering, although Kasich signed the disputed map into law.

Husted, who is now running for lieutenant governor, questioned the timing. “Why did they wait six years to file a lawsuit challenging the maps? These groups should respect the will of Ohio’s voters who overwhelmingly approved a constitutional amendment earlier this month that established a new, bipartisan process for drawing congressional districts starting in 2021,” he said in a statement released after the suit was filed.

Ohio voters in May approved a change to the Ohio Constitution that will govern how the Ohio map will be drawn in 2022, after the next census. The change includes new limits on how counties could be split and the influence of any one party on the process.

However, advocates involved in the suit hope hope a ruling will lead do a new map before then.

6.26.18 – The ACLU of Ohio, Ohio A. Philip Randolph Institute, League of Women Voters Ohio along with sixteen Ohio voters – one in each of the congressional districts – filed an amended complaint in U.S. District Court in Cincinnati to strike down Ohio’s current congressional map to ensure more balanced districts are established in time for 2020 elections. In addition, new plaintiffs were added to the lawsuit, including the Northeast Ohio Young Black Democrats, the Ohio State University College Democrats, and the Hamilton County Young Democrats.

Every day Ohioans are becoming more actively involved in taking new laws passed by the Republican-controlled Ohio House and Senate to the people for our voice and vote at the ballot, as we saw with the SB5/Issue 2 Referendum that was resoundingly defeated by the people of Ohio in November 2010! Know the petition process BEFORE you sign a petition!

Here is the latest information on this development: 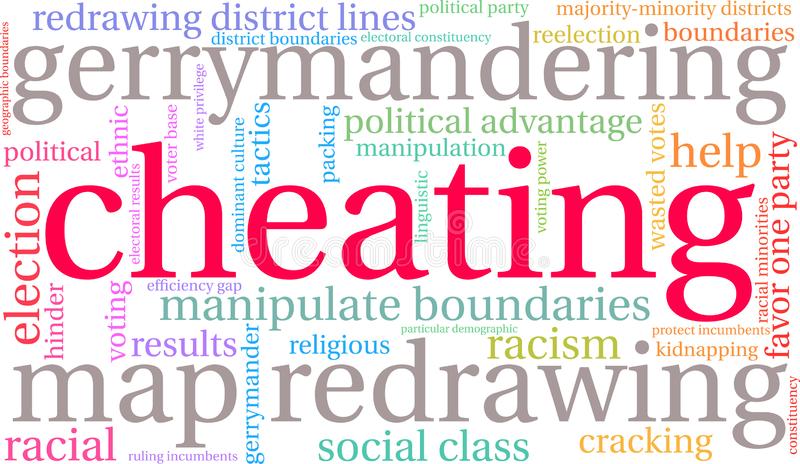